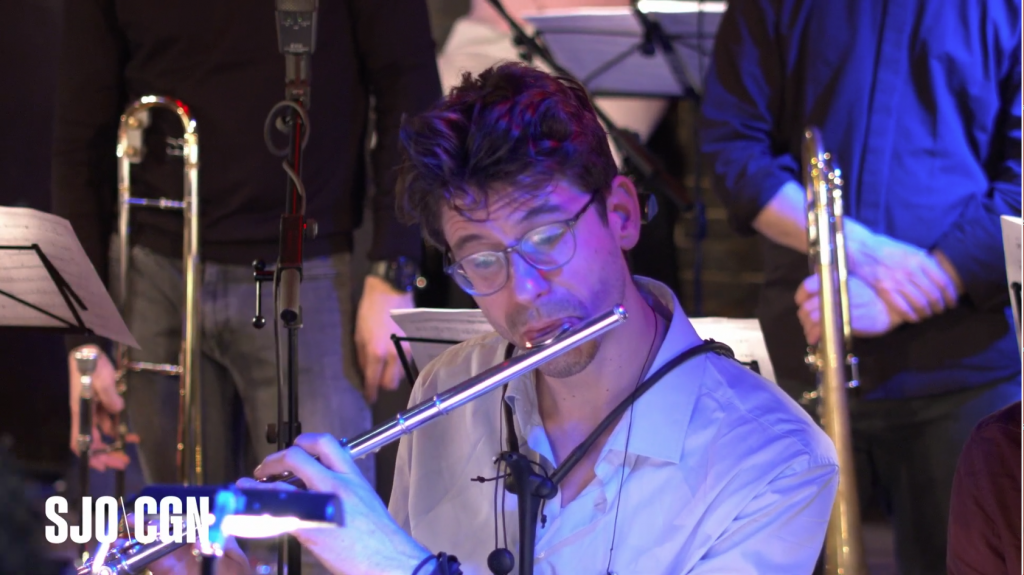 Finally the video of INHALE is out.
Premiered by SJO/CGN at Subway Club on December 8th 2021 as part of the European Composers project.
Check it out on you tube and on instagram is also available a small explanation of the idea behind.

Here available also a small interview where I say more about INHALE (Inspira)!

I’m glad to announce that I was selected s part of the project EUROPEAN COMPOSERS promoted by Subway Jazz Orchestra of Cologne.
The big band selected five young composers from all over Europe who have composed new works especially for Subway Jazz Orchestra and will be giving their world premieres on the 8th of december.
This was preceded by a Europe-wide call by the SJO for composers up to 35 years of age. From the 54 applications received, the collective selected five candidates who were awarded a commission to compose for the orchestra.

Congrats also to the other 4 selected composers:

Jorik Bergman (born 1996 in Leiden, The Netherlands) is a professional jazz flutist, composer and arranger living in Cologne. She enjoys writing for large jazz ensembles and is currently organising her next big project. On the side, she has her own jazz trio in which she plays the flute, is doing her Master’s degree in composition at the Cologne University of Music and Dance and is also a professional model. Her dream is to retire one day and build her own miniature golf course in the south of France.

Tobias Hoffmann (*1988) is a saxophonist, composer and arranger born in Germany and currently living in Vienna and Graz. Besides being the bandleader of his award-winning “Tobias Hoffmann Nonet”, he works as a sideman for various projects and bands. He is also currently working on the debut CD of his “Tobias Hoffmann Jazz Orchestra”, which will be released in 2022.

Bianca Rantala is a 22-year-old arranger, composer, pianist and big band conductor from Estonia. She is currently studying music production in Helsinki, Finland and works as a freelance musician. Rantala is the conductor of several Estonian big bands, including the Taltech Bigband, the GOMK Bigband and the New Wind Jazz Orchestra. She has composed and arranged for all kinds of ensembles, but especially for big bands, vocal groups, wind and string orchestras. In 2020 she won 1st place in the Baltic Big Band Composition Contest.

Born in 1992 in south-eastern Styria (Austria), singer, composer and pianist Ursula Reicher shows her great passion for music in her diverse work, moving in many musical styles. She completed her master’s degree in jazz composition and arranging with Ed Partyka at the Kunstuniversität Graz/Institut Jazz as well as studying music education at KUG Graz and German at KF-Uni in Graz. Her great love is her current main project ‘The Void-Quintet’, a special formation with which she released her debut album “Globular Cluster” in 2019 and was also awarded a Downbeat- Award for “Outstanding Performance” in 2019 and 2020. Ursula was also awarded a Downbeat Award for Outstanding Composition in 2020 and 2021.

Berlin selected as a finalist at the Barga Jazz International Contest

I’m glad to announce that my composition Berlin got selected as a finalist at the XXII CONCORSO INTERNAZIONALE DI ARRANGIAMENTO E COMPOSIZIONE PER ORCHESTRA JAZZ. 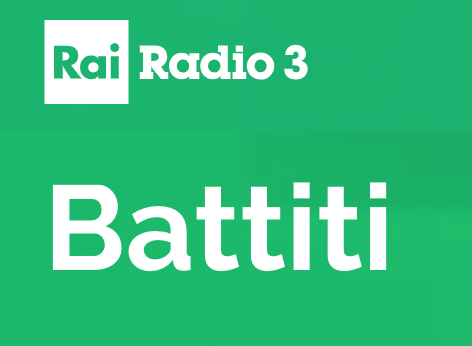 The streaming of the episode of BATTITI is available. Pino Saulo presented the new album of the Bud Powell Jazz Orchestra – DEDALO. 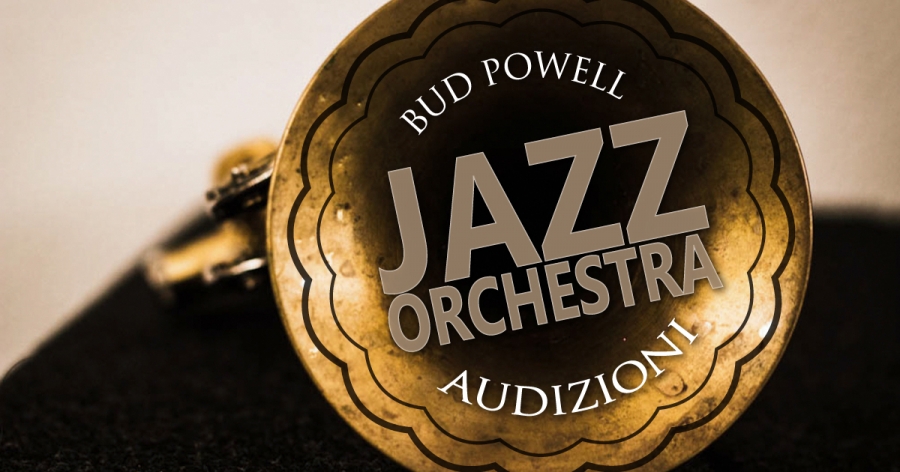 All musicians who play an instrument are invited to take part in this magnificent experience that has been consolidated over the years thanks to great efforts. For those who would like to have a testimony of what we have achieved, just listen to “Dedalo”, the latest album by the Bud Powell Jazz Orchestra produced by the Cultural Association Jazz Bud Powell.

To participate in the auditions you must register on the site: magliejazz.it and send your details to book at the meeting to be held Sunday, December 23, 2018 at 17:00 at the headquarters of the Association in the station square, 5 in Maglie.

“Joining forces, sharing projects, and proposing new ideas is the spirit of this Association that for years has been trying to spread thanks to the enormous passion.” 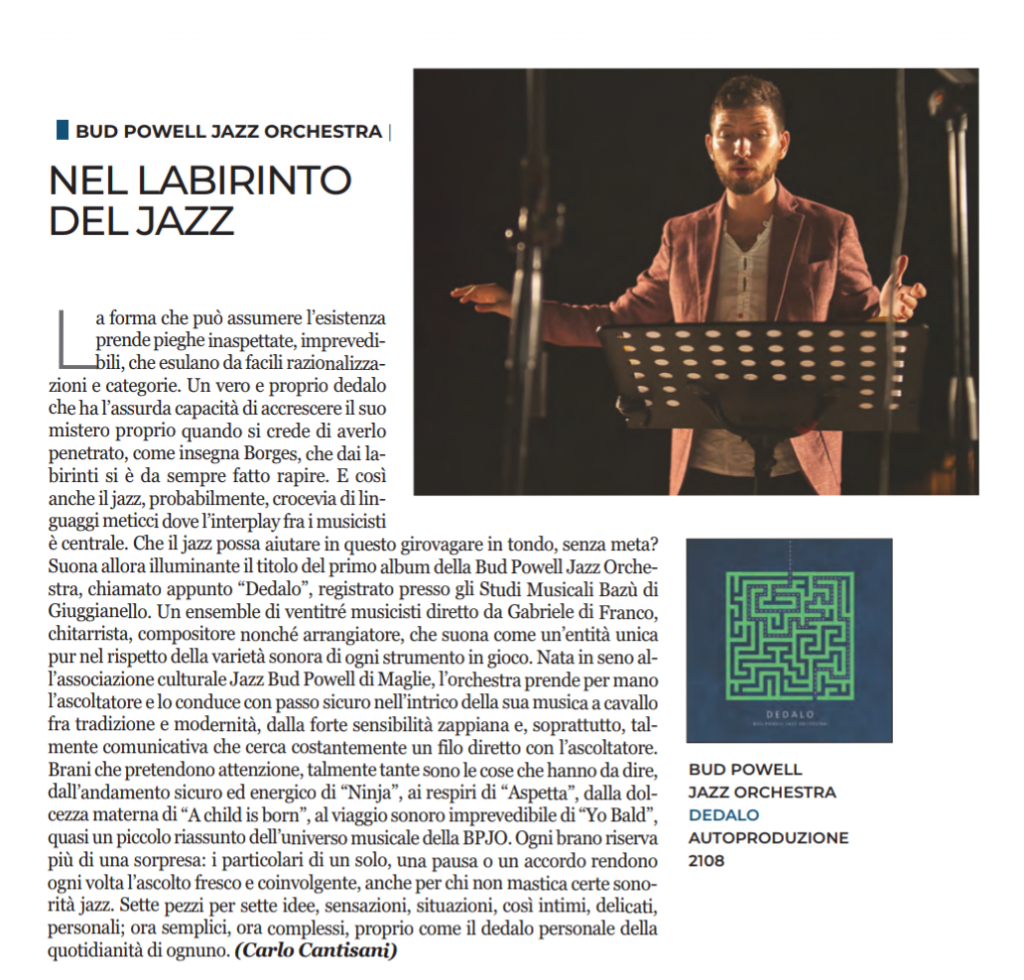 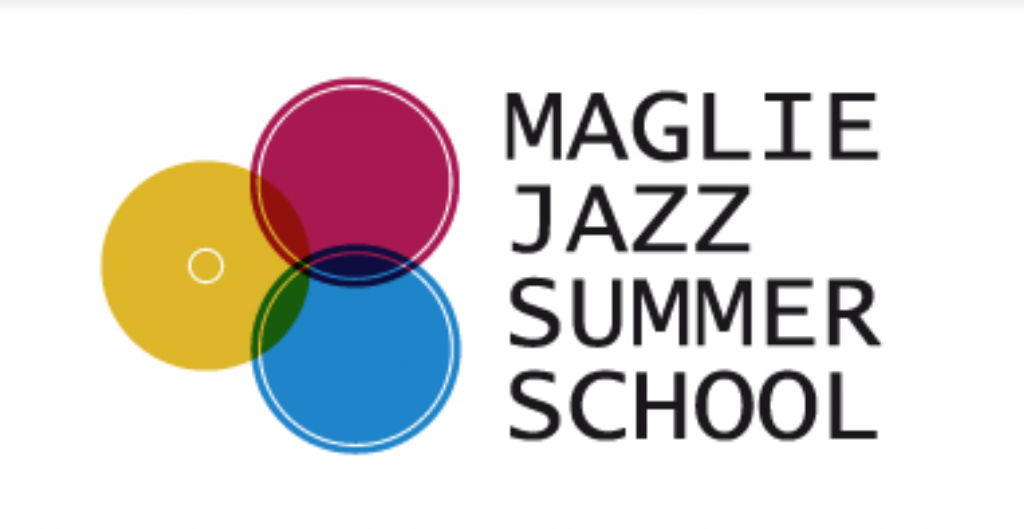 (scroll down for english)

I am proud to announce that I am part of this beautiful teaching team:


The Maglie Jazz Summer School project is an initiative of the Jazz Cultural Association “Bud Powell” of Maglie.

From August 27 to September 2, 5 participants per instrument, divided into 6 classes (one for each instrument: sax, piano, vocals, guitar, double bass, drums) will take part in the only summer Jazz workshop in Salento.

Thanks to the partnership with Koninklijk Conservatorium Brussel all KCB students will benefit of a 20% discount. 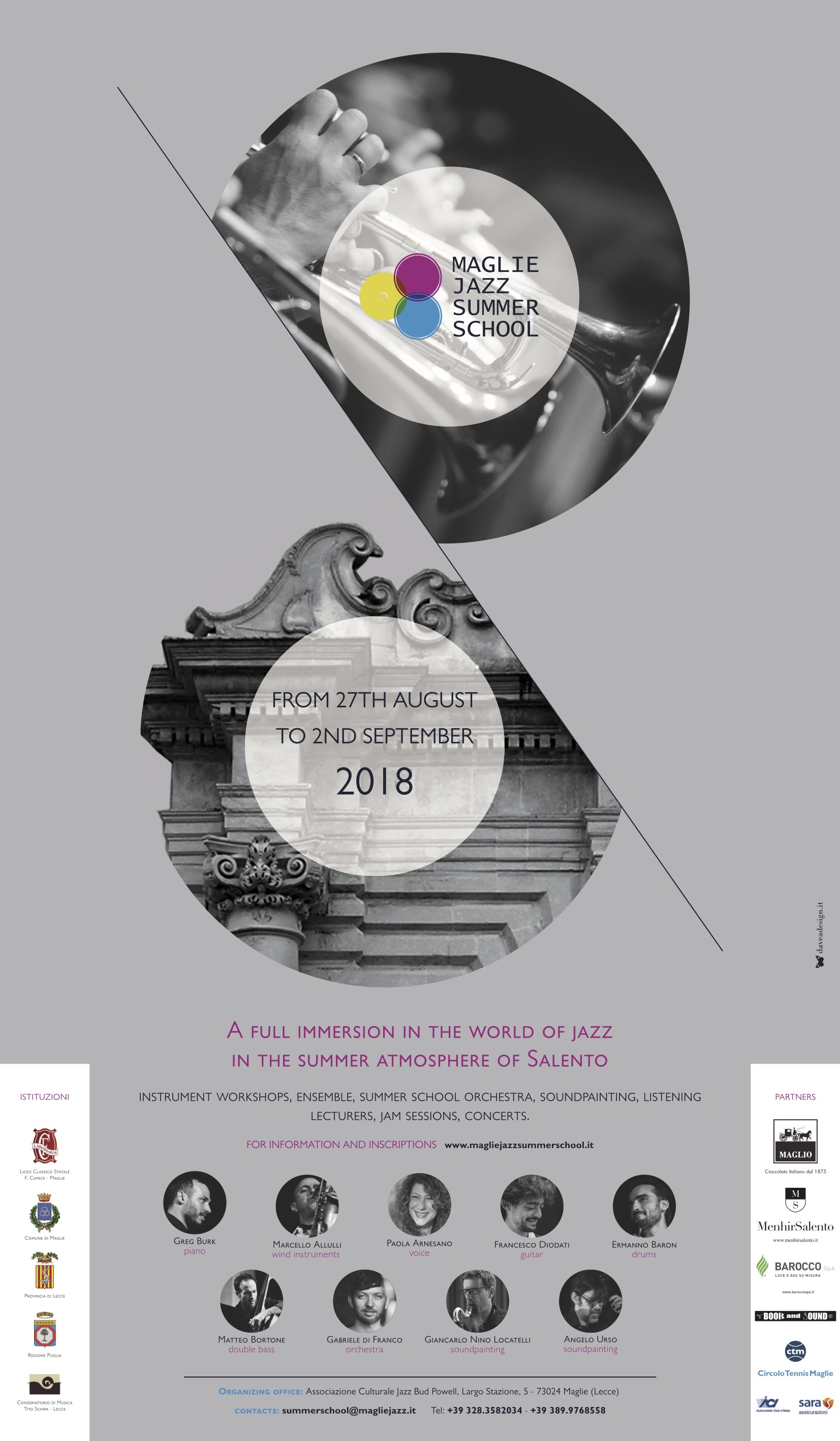 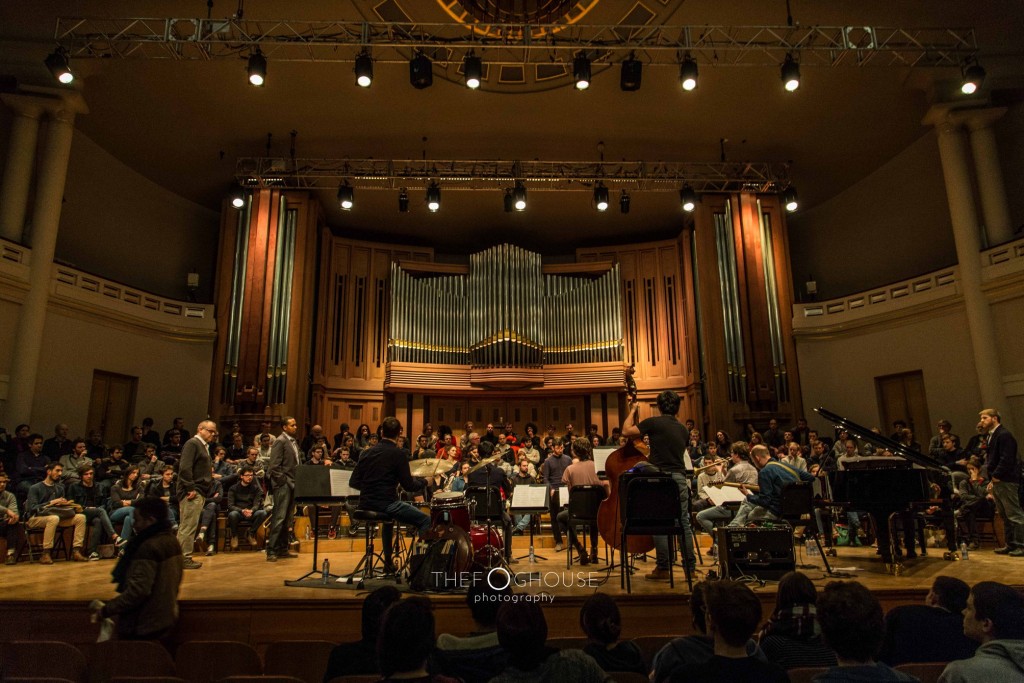 Monday 19th I had the honor to perform 2 of my arrangements inspired by two great composers: Monk and Ellington, in the great venue of Bozar, coached by the members of the Lincoln Jazz Orchestra and with the support of Kris Defoort.
Here some wonderful photos by Pepa Niebla. 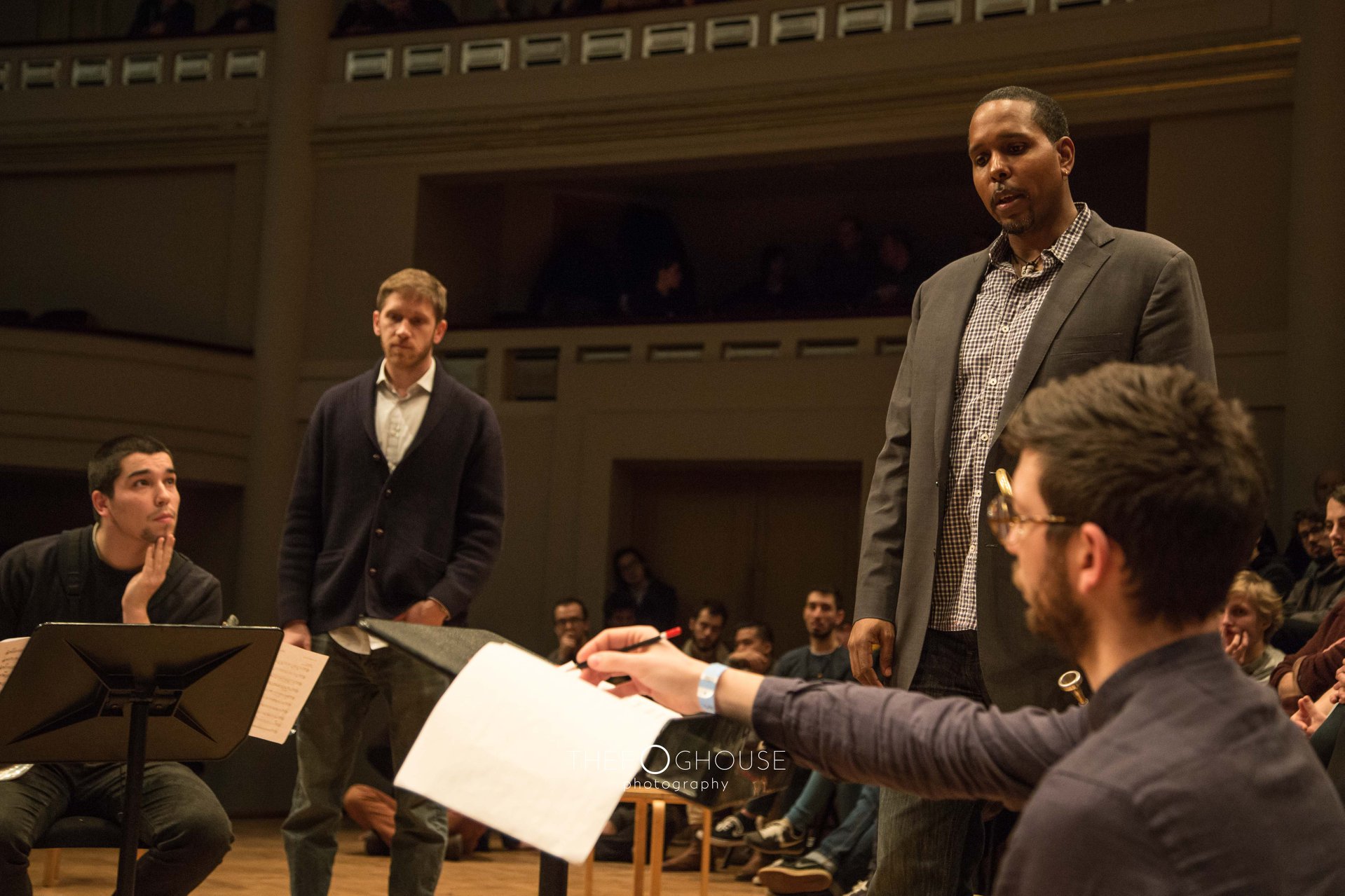 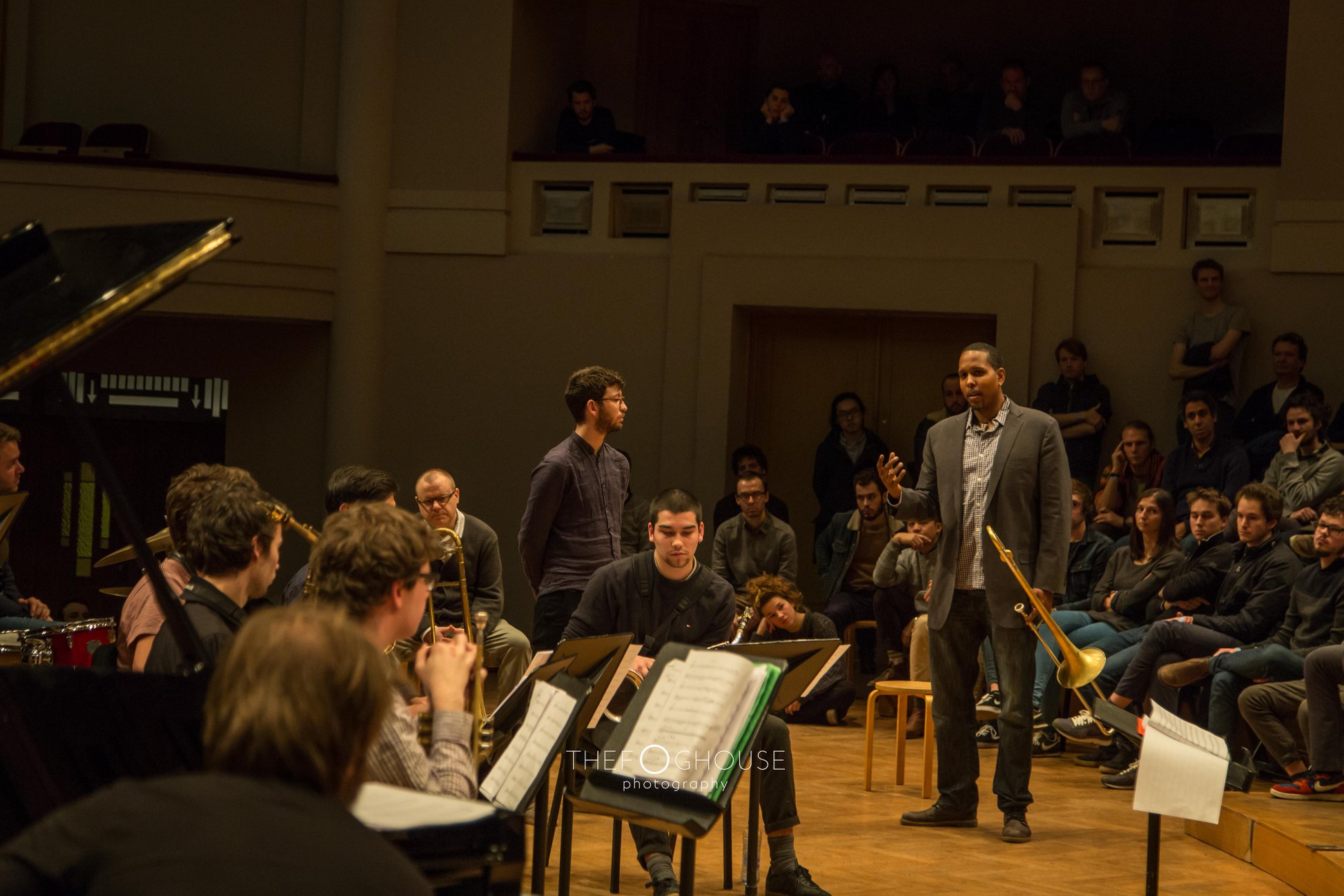 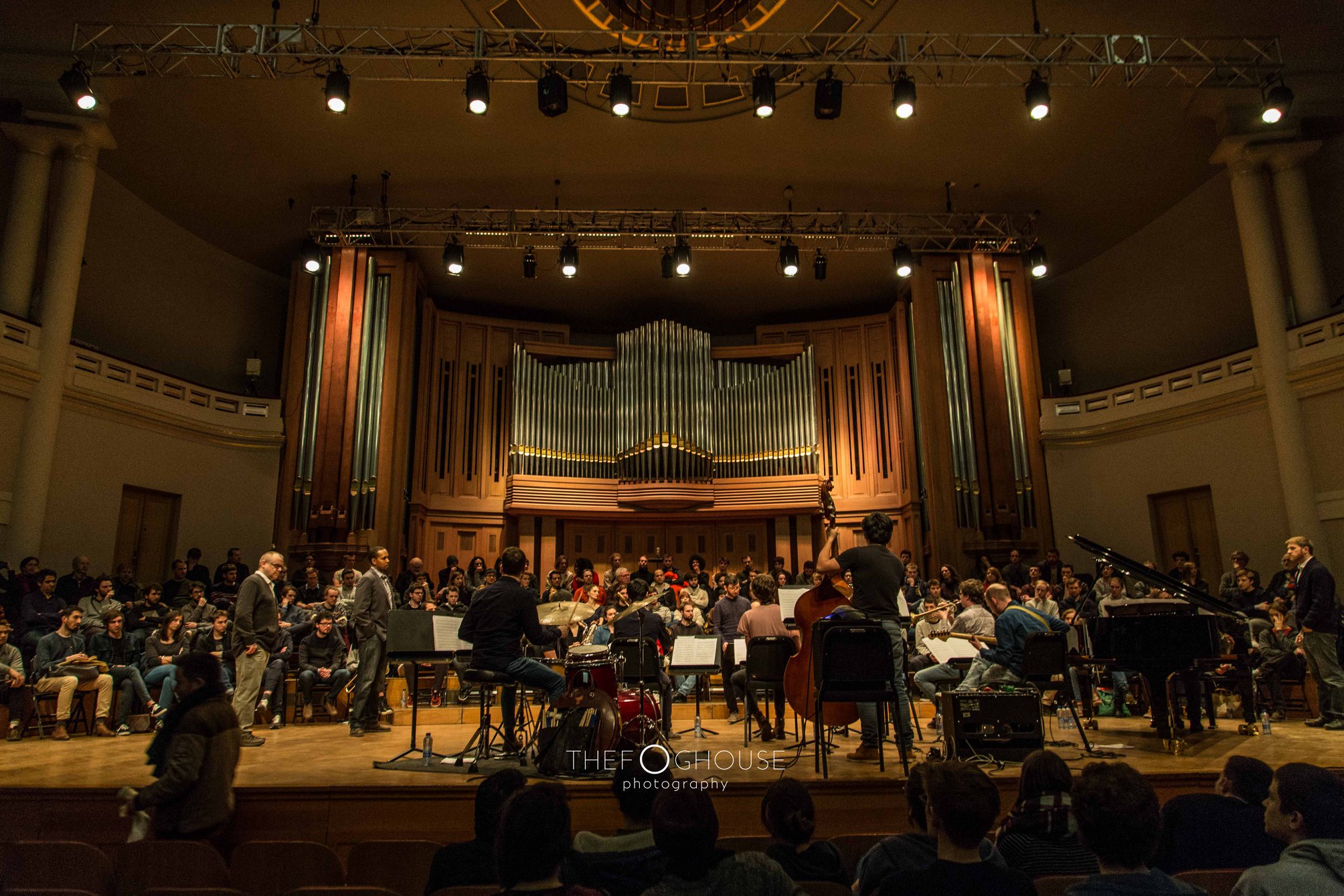 “Waiting, trust, patience. You’ll find it all in “Aspetta” (Wait), the piece for which Gabriele di Franco from Lecce was awarded the price for second best composer at Jazz Comp Graz 2017. He was the only Italian finalist among 52 candidates from all over the world. A lot of his life can be found in the notes written on that pentagram. His dreams which has brought him far from home, to the city of Brussels which has welcomed him among its musicians, the passion who brought him to bet on music as his livelihood, a life with no schedules, no set hours or rules, just rigor, commitment, will. Gabriele is young and has his career in front of him, we interviewed him the day after his victory.”

you can download the journal at the following link:
https://goo.gl/DvqrAJ 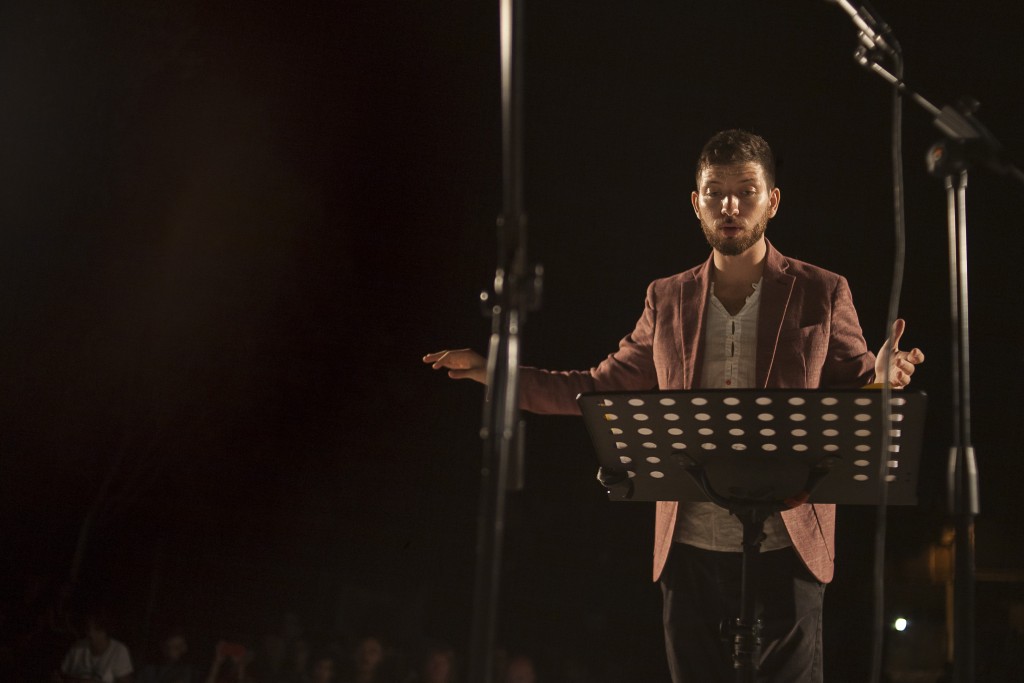 Finalist of JazzCompGraz 2017 with “Aspetta”

I’m very glad and thankful for this great news: I’m one of the finalists of JazzCompGraz 2017 for Big Band Composers!

The jury, composed by Ed Partyka (Chair), Michael Abene, John Hollenbeck and Jörg Achim Keller, have selected 10 finalists from 52 applications coming from all the world:

I’m proud to be the only Italian in the final.

As a finalist, I’ll have the opportunity to take part in the rehearsals of the KUG JazzOrchester and attend workshops with the Jury members. The winners will be chosen upon the presentation at the final concert (17.11.2017).
The whole finals will also be recorded live and published in the first half of 2018.
jazzcompgraz.com
Older News »